Two different communities constitute a single municipality. Characterized by spontaneous architecture in local stone with the typical pink color, these two countries are located on the opposite slopes of the Monte Toc landslide. Rich in history and charm is the ancient representation of the Passion that has been taking place for many centuries around the village of Erto during the Good Friday, to honor a vow made after a terrible plague. It is the starting point for spectacular paths, such as the Val Zemola one. The village houses the headquarters and exhibitions of the  Eco-museum Vajont and in addition it is also part of the Authentic Villages of Italy.

The landslide and the Vajont Dam 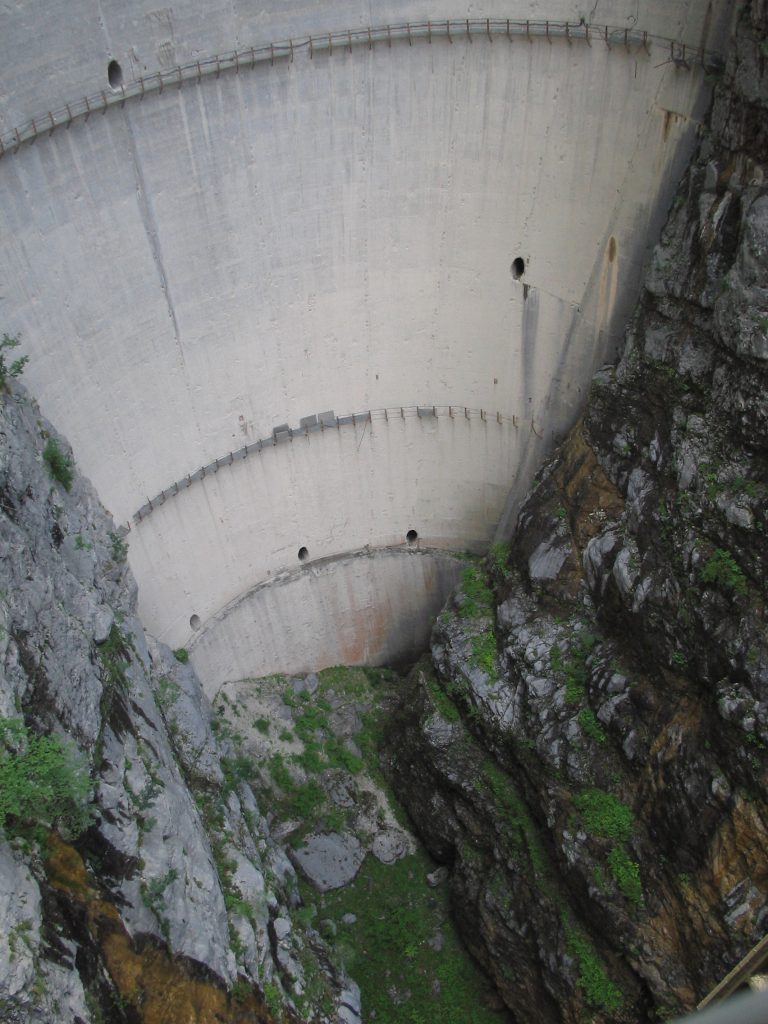 At the end of the fifties and the beginning of sixties, a few hundred meters upstream of the confluence with the River Piave, the stream Vajont was blocked,  with hydroelectric purposes, by a dam. This plant was never officially operative because a huge landslide partially filled the tank causing a huge wave and nearly 2,000 victims. The Vajont landslide is only the latest and most tragic chapter in the recent life of a mountain, during which the rocks were formed, raised and then eroded. Human intervention, with the construction of the dam, in a valley already geologically unstable facilitated the detachment, in the evening of October 9, 1963, of the giant landslide (270 million cubic meters), which ran from Mount Toc at high speed into the lake partially filled. The arch dam, 265 meters high, was the tallest of its kind in the world resisted the unprecedented destructive force of the landslide and the wave. The Vajont valley, with the countries of Erto and Casso perched on steep slopes, still appears strongly marked by the event, which actually began even before that tragic night, when the raising of the reservoir caused the loss of the few and poor resources held by the people in the valley. At the Erto Visitors Center you can visit the exhibition “The catastrophe of Vajont, a space for memory”, documentary center that describes the event in all its phases. At the dam there is also a seasonal information office.

“Voices of the forest”: wood is the main theme of the museum that preserves the history of the village. Wooden toy that becomes, crib and shoe soles in the exhibition dedicated to children. Good to be purchased, handcart and chest of drawers on the shoulders of the brave street vendors in the thematic route “Leave, I will leave, I must leave …” Art in the wooden works of sculpture symposium celebrating the continuity of life after the anniversary of the Vajont disaster and that divide space with a miniature forest of logs. Mauro Corona has given voice to the trees in the audio-sound path accessible with the sensory headphones. The enchantment of the woods of Erto then reveals itself through “The magic of the wood becomes charcoal”, exhibition dedicated to the ancient craft of the charcoal burner. 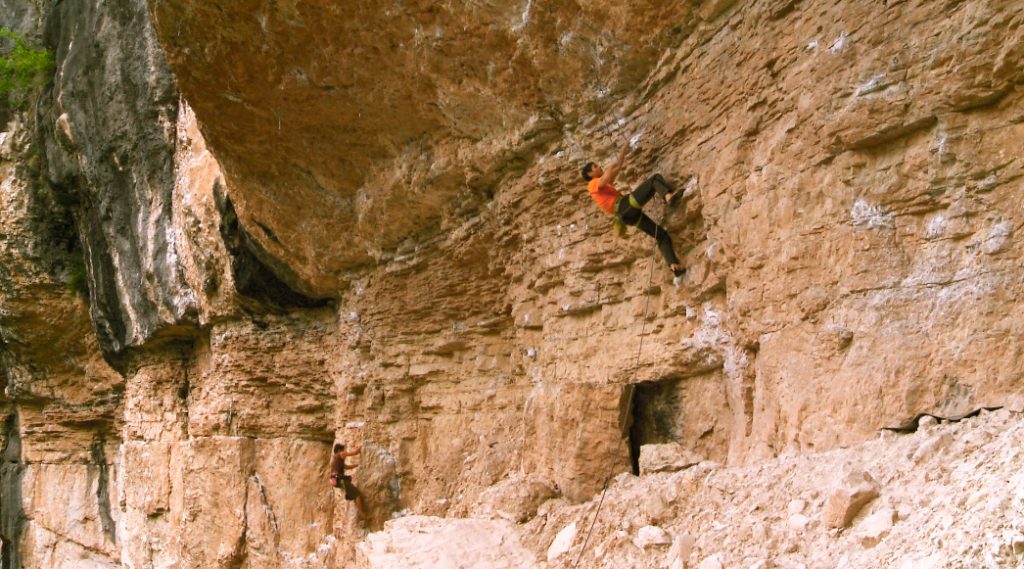 The climbing wall at the Vajont dam (Erto) was founded in 1978 and is one of the most famous climbing cliffs of the world. Under the rock of Moliesa there are more or less 300 climbing routes of all levels. The central part, ocher-yellow colored,  is the most difficult. In that area there are ways that reach up to 8c, ie the 11th  level. For example, in the area just on the right of the wall, there are easier ways: they are marked by a number ranging from 1 to 18. They are all ways that, in the first throw, reach a maximum of 5th level. There are also ways to start as #  13, 14, 15 or “Candida” or “Bepi Manarin” and other nearby routes not exceeding the 3rd level.

There is also a very easy and funny path for children: it is just on the right, at the end of the climbing wall on the old road. The left side, dark colored (towards Longarone), is characterized by very difficult and very technical ways; however, the hardest area remains the central, yellow colored. Until a few years ago it was the most difficult and strenuous climbing wall in Europe and it is still one of the hardest, which each year attracts climbers from all around the world.

It is a path that connects ideally the entrance to the picturesque Val Zemola (Erto) to the village of Casso. It is a path where once people carried on the shoulder charcoal of the Val Zemola woods. Trail “between legend and reality”, it runs through the village of San Martino in Erto and leads us to discover the ancient legends handed down in the valley, first of all the one of Queen Claudia’s castle. 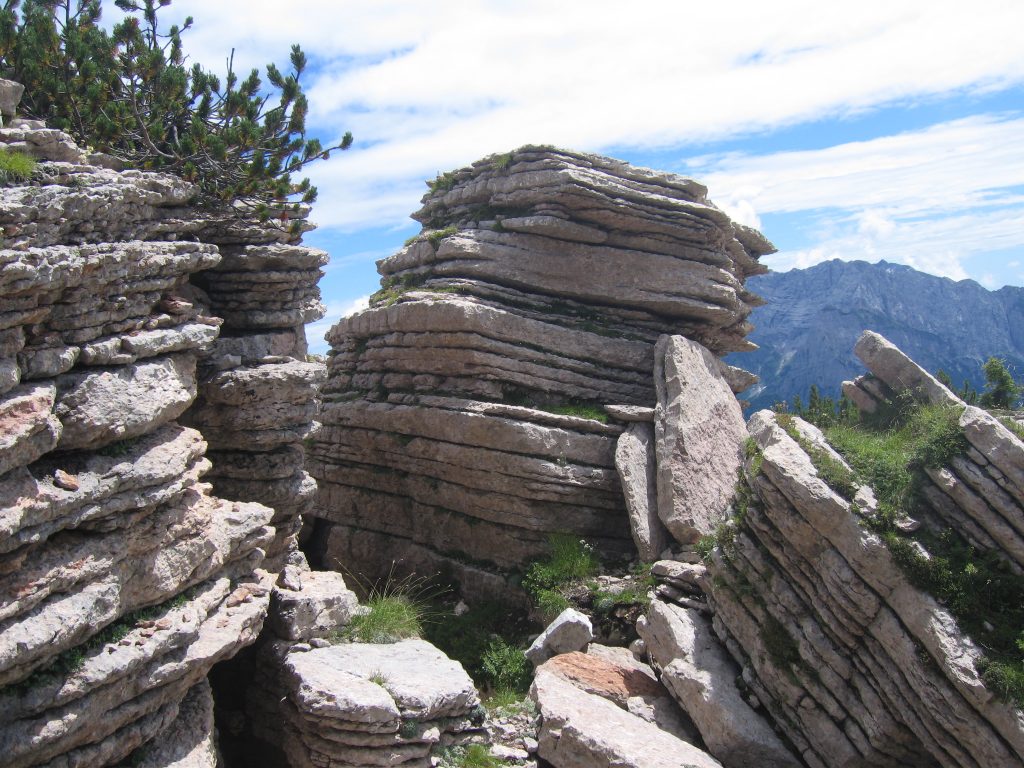 The legendary Books of San Daniele of Mount Borgà present themselves to the observer as real piles of rock slabs consisting of Red Ammonia (Soccher limestone). They are residual rock masses, that the fold-fault dislocation of Monte Borgà, being made up of very resistant rock, found their own location on a small plateau just below the summit of Mount Piave.
Here they have been subject, in time, to erosion that has affected the most alterable parts (debris clay), by favoring the leaf-shaped fragmentation.

The nodular structure of the Red Ammonia is considered, according to the most reliable hypotheses, acquired during early diagenesis by the combined effects of biotic, cementing and dissolution changes. These factors were acting on a non-homogeneous sediment and consisting of variable dissolution proportions. These factors were acting on a not homogeneous sediment and consists of clay debris (the most alterable part), lime fossils, Saccocoma and Ammonia shells. The name Books of San Daniele comes from a popular legend telling that Daniel, patron saint of travelers, wanted to build a church on the mountains and so carried there the sheets needed to build the floor.

They are located within a space non-larger than a football field and they give the panoramic ridge a special charm. The upright or upside stacks of flaked sheets remind, in fact, some giant, mysterious books petrified by time. The geometric regularity of the phenomenon, however, gives the impression that the unique structures are the result of the intervention of an intelligent hand. So the legend resists science, because it is necessary for man to keep on growing, in their mind, some kind of mystery. In the past the same stone plates have been transported to the valley and used to make the covers of Casso houses.

The Visitors Center of Erto is entirely dedicated to the catastrophe of the Vajont in 1963. It is divided into two sections:

“Vajont images and memories” hosts a vintage photo collection.
The route will take you back in time to discover the traditions and customs of the Vajont people before the tragic events of 9 October 1963 until that fateful night when the huge landslide broke away from Mount Toc and fell into the artificial lake unleashing the fury of the water that caused 2,000 victims.

“A memory space” describes in detail and scientifically the whole story from the design of the hydroelectric reservoir of the “Great Vajont” until the tragic event. Everything is told through descriptive panels. Also you can see charts, graphs and compare three-dimensional models. In the multimedia room a CD-ROM allows you to have a global vision on the disaster and observe the graphic reconstruction of the landslide with also original footage.
All this makes the Visitors Center of Erto the most important and complete documentation center on the awful event and also a valid reference point for studies and research.